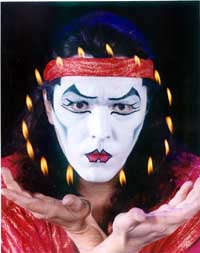 "Jeff McBride, named Magician of the Year by The Magic Castle in Los Angeles, is recognized as a foremost innovator in contemporary magic. New York Times columnist Glenn Collins writes, 'What Mr. McBride gives his audiences is amesmerizing performance...a magic show that is at once a celebration of mystery and a struggle to understand powerful forces.'"

(from his bio at www.McBridemagic.com)

This week's interview is graciously provided by Professor Richard Wiseman. Mr. Wiseman is the co-author of Magic In Theory, among other titles. You can visit his great website here.


Also you can purchase Magic in Theory via amazon.com. Also visit his website to see his other books.

This interview was a part of a panel

Even the most skeptical observer of magic can all of a sudden have their paradigm popped by a magical illusion. And all of a sudden, all of the linear thinking, and all of their logical foundations that they depended on their entire lives, at that moment, falls away. And in that moment of astonishment, there is a potential for transformation.


And wasn’t it David Blaine in just what seemed like a physical stunt rather than magic?

A lot of his things have to do with him trying to be totally still: being buried underneath water, being frozen in a block of ice. They’re about stillness. And when we live in an age where there’s a Starbucks on every corner, and we live in a hyper-caffeinated, technological, sped up society where everybody’s on a cell phone all the time, and plugged into their Blackberry then [makes a whirling busy sound] and it’s like, ah, look at him.


(imitating the words of the crowd:)


“He stands still. He does nothing longer than anyone has ever done nothing.”


“I can’t believe how much nothing he can do.”


You know, it’s a statement on our times that the person that can be still and at peace, and with themselves without being constantly distracted or pulled by desires, is actually accomplishing something miraculous.


Yes. I’m not very interested in sleight of hand, because it’s all very clever, but it doesn’t arouse me in any way.


(another says) That’s another type of show.

Wow. I think sleight of lame.


What I’m trying to say is the big illusions.

In the magic show, it’s one of the few places where people can come close to death in a theatrical art form. The buzz saw illusion of Horace Goldin. The sawing in half trick, as we know it in popular culture, was Percy Tibbles – as P.T. Selbit was the name Tibbles backwards – made this trick famous, the sawing in half of a man.


But it wasn’t as horrific as Goldin’s version – sawing a woman in half, taking advantage of a helpless woman, and putting her in a box, and sawing her in half. And they had units of this show touring all over the world simultaneously. So these kind of illusions have always fascinated us, these death and resurrection illusions. And they also speak to a mythic theme of the indestructibility of the feminine of nature.

What do you think is important to the performer who wants to achieve presence on stage?

One of the most important things is creating the illusion of intimacy with an audience, even if you can’t see the audience out there. Channing had it. If you notice, he’s not looking at what he’s doing at all. He’s mostly looking at the audience, or looking away. So there’s this sense that he’s almost more interested in you out there than what’s happening here.


As soon as the dove happens, he kind of hands that out to them. It’s not like hey, ha – here’s the double dove. Boom. Hey, you know.


He’s not doing the cheesola style of magic. He’s underselling everything, so he can concentrate on his audience. Max Maitland has that. It’s the eye; that, like, master gaze. That what’s going on inside of this performer’s head is as interesting as what’s happening in their hand.


And, again, I come back to David Blaine. I come back to Derren Brown, performers like that. What’s going on inside of their head? That’s what people want. Not so much about the technique.


Yeah, I was very interested to hear what you’re saying about – I think they call the Masked Magician, where he gave away all the tricks.


Do you think, I will say, an international thing, or just in the U.K. that we’re overly hung up on sort of secrecy of magic, and it sort of gets in the way of getting more people into magic. Or do you think it’s still important?


And then that’s not the important part. It’s the presentation, and the styling. I think presentations like this are very healthy, because they gather people together – oh, we’re gonna learn the tricks. Oh, it’s not about the tricks. It goes a little bit deeper.


So unless we had shows like that – and I’m not saying I’m not a big supporter of Valentino, the Masked Magician. They were very mean-spirited specials. They had a very, kind of nasty, cynical Nineties edge – you know, early millennium edge to them when they were done. Breaking the code. This guy’s bad. He’s a bad – and that creates news and controversy, and makes magic – you know – a subject for the media. But it also got a lot of kids interested in magic.

Posted by Chris B Labels: *Audio, Jeff McBride, Richard Wiseman at 2:24 AM

Send the news our way at chris at chrisbritt dot com.